DEALING WITH DEFECTS UNDER THE HOME BUILDING CONTRACT: A Guide for Home Owners

Home > Building Dispute > DEALING WITH DEFECTS UNDER THE HOME BUILDING CONTRACT: A Guide for Home Owners

Building your dream home is supposed to be an exciting time in your life. But when you inspect the property at the hand over, and over time you live in the property, you identify defects in the house.

This article is for home owners who had their construction project done under the NSW Fair Trading Home Building Contract for Work Over $20,000, and would like to know how to address defective and incomplete works. 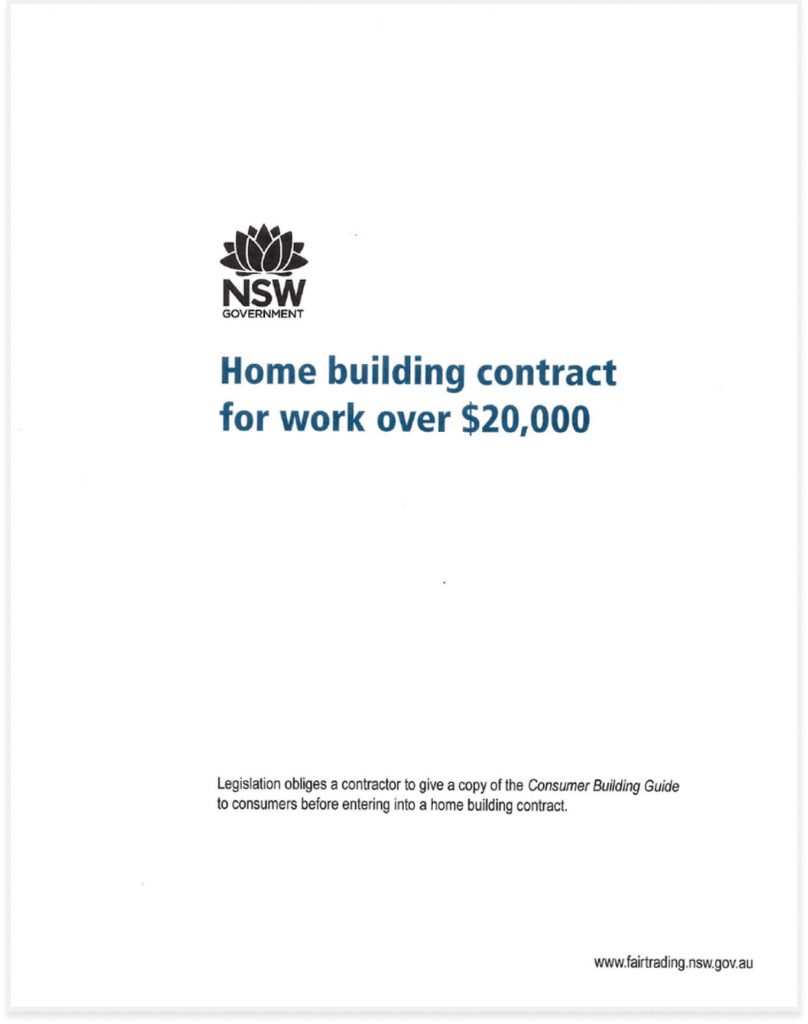 What is a defect?

A building defect may be anything from substandard quality in design and construction, faulty workmanship, or early deterioration in the works. Incomplete works are also considered a defect.

Your NSW Fair Trading Home building contract for work over $20,000 contains a clause listing the Statutory Warranties that a builder/contractor is required to comply with. If they violate any of those, that’s considered a defect.

Statutory Warranties are imposed by law
They basically say that:

1. the building works should be:

2. and the materials used should be:

When and how can you check for defects?

You can check for defects by inspecting the premises at the time of completion of work. 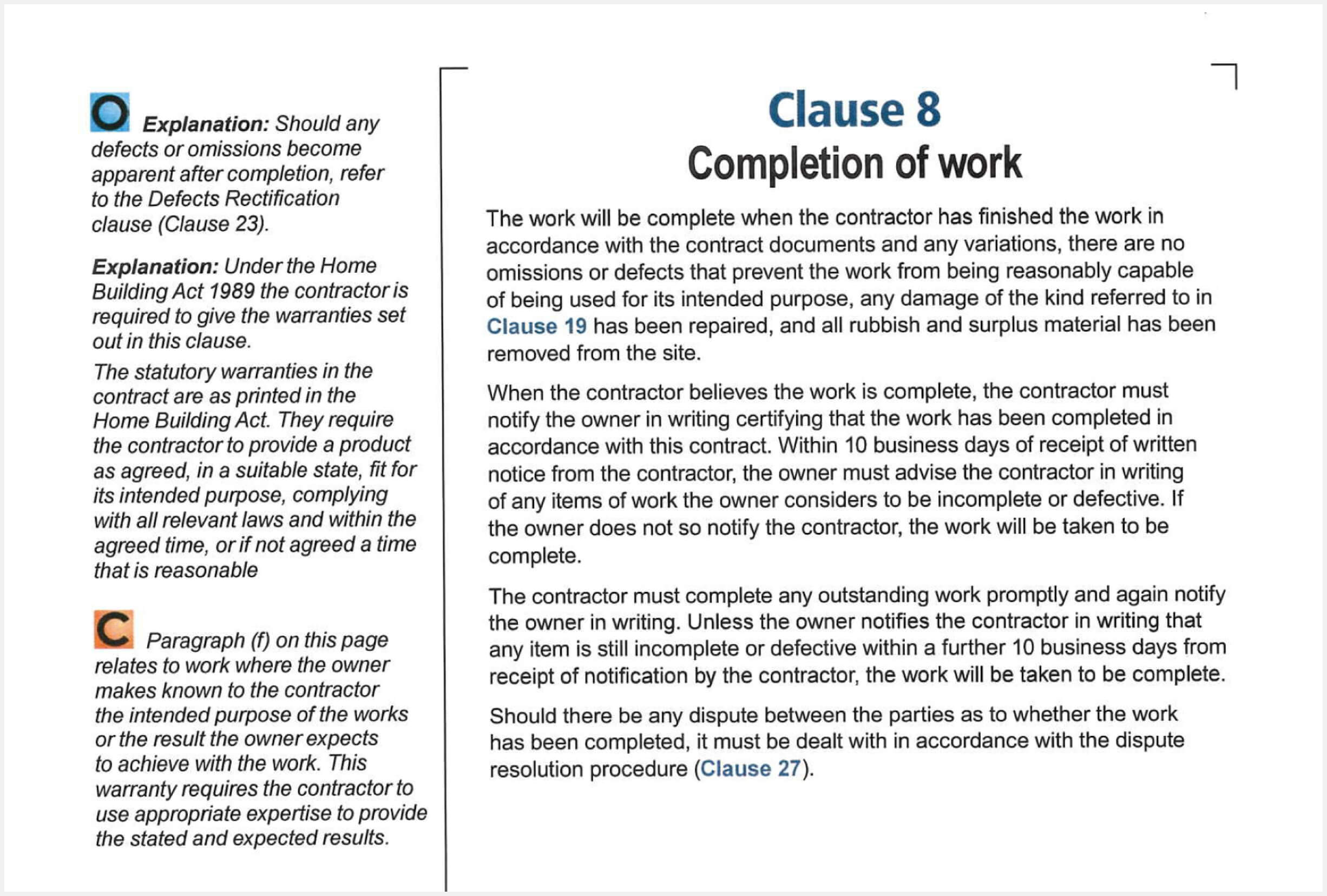 Once the builder/contractor believes the work is complete, they will notify you in writing. You will then have 10 business days to inspect the works and provide them with a list of defects and incomplete works.

Notably, there are building defects that similarly occur in residential construction projects in NSW. From our research, we have identified the following to be the most commonly occurring defects for the past year: 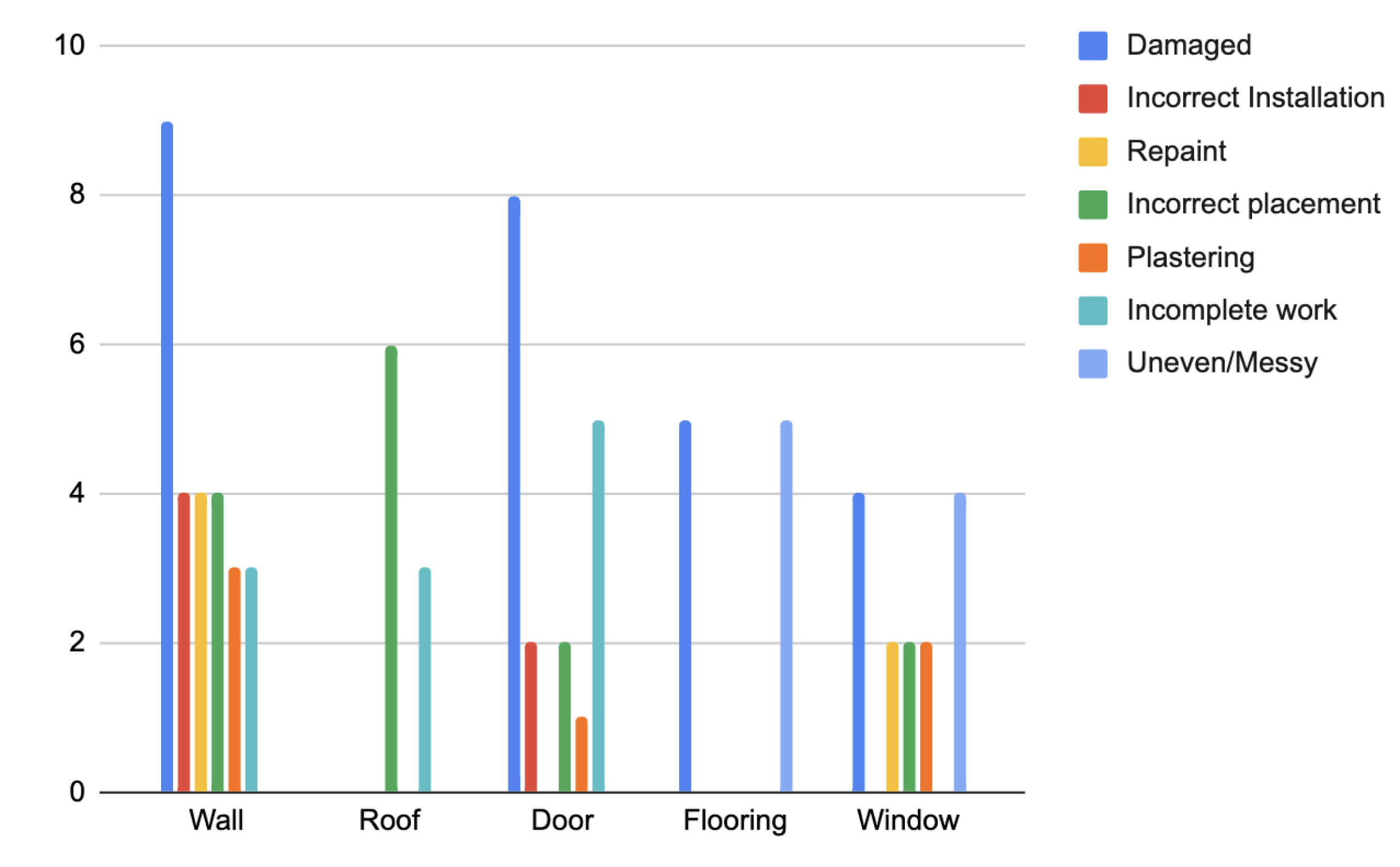 Once you’ve given your list of defects and incomplete works to the builder/contractor, they need to rectify said defects at no cost to you, within 30 business days from receipt of notice. 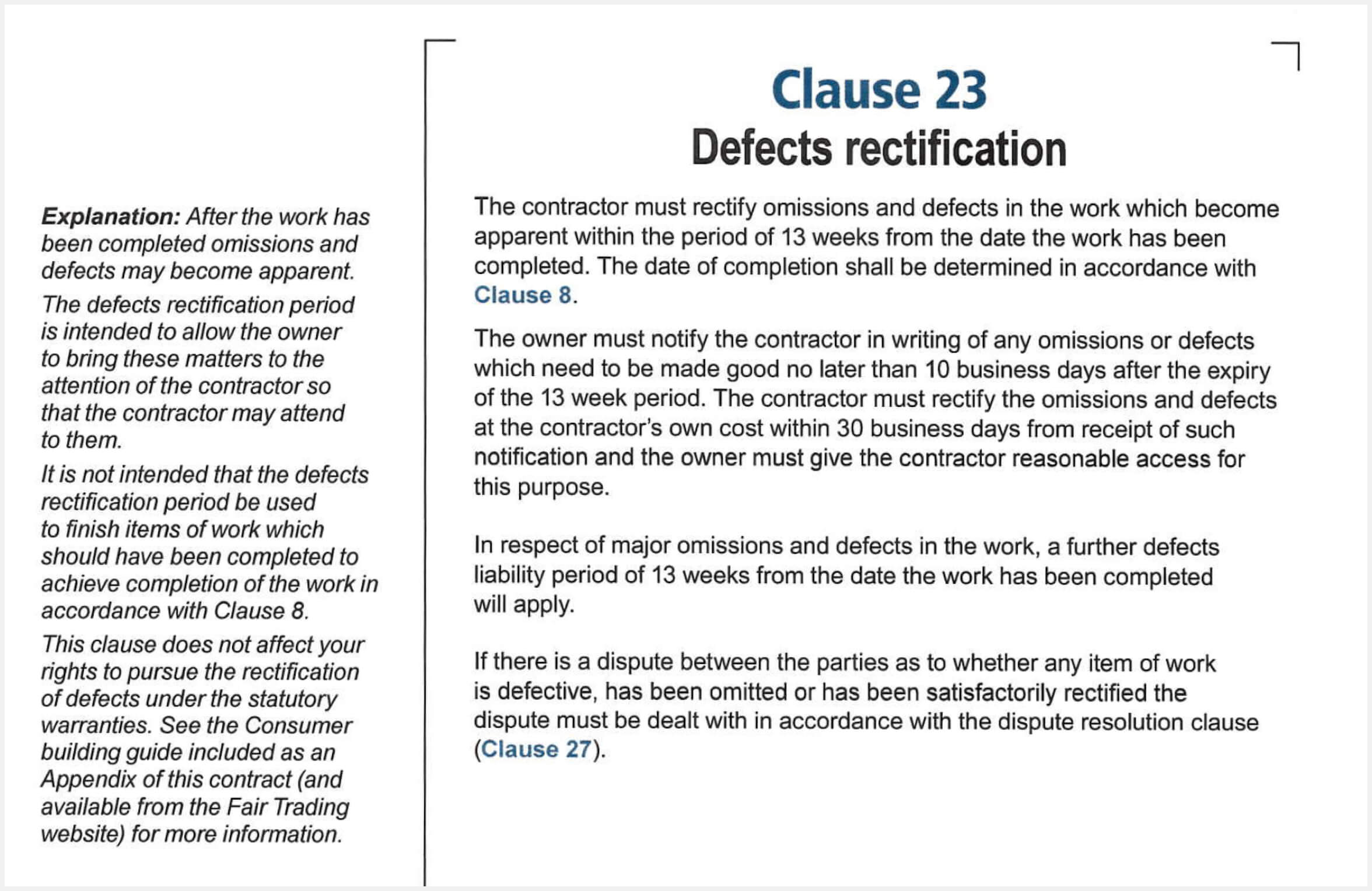 When defects turn into dispute

If the builder/contractor contests any item on your list, or for any reason refuses to rectify the defects or complete the incomplete works, you may take that as a dispute.

Clause 27 of the Fair Trading contract lays out the procedure of settling disputes, including those arising out of defects and incomplete works. 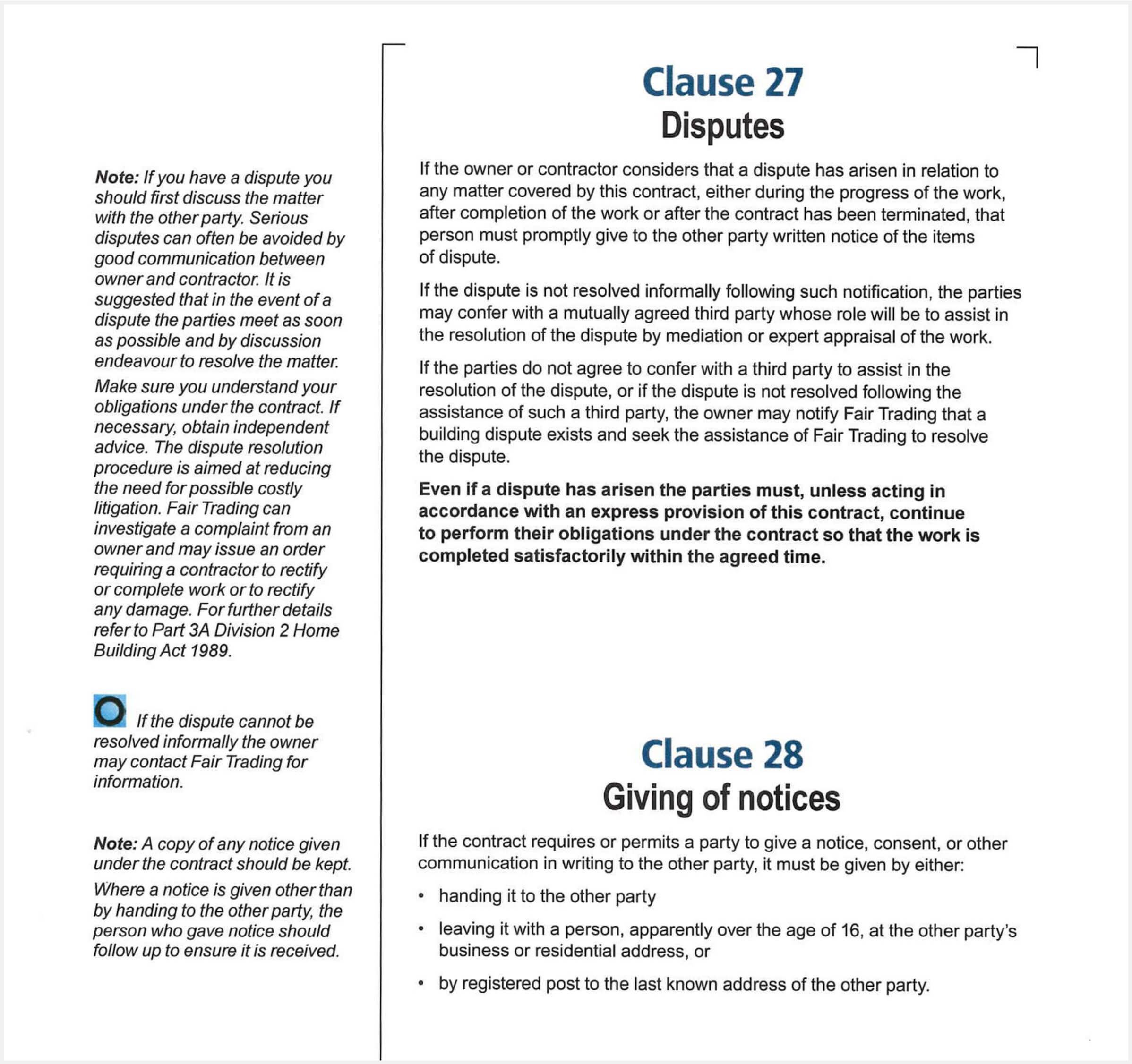 1. Sending the other party a written notice of the items of dispute, followed by efforts to amicably settle the dispute internally.

2. Involving a third party to mediate, or engaging an expert to inspect the works, if the matter cannot be resolved internally.

3. Seeking the assistance of the Office of Fair Trading if the above two steps fail.

4. If the dispute still remains unresolved after taking it to Fair Trading, you will be given a certification to lodge a complaint with NCAT, where the matter will undergo directions hearings. A final hearing may be had where the disposition of the tribunal will be made.

5. You have further recourse with the courts if the above fail. 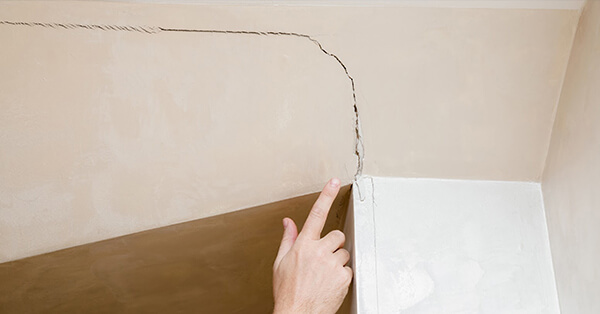 How we can help

The Office of Fair Trading’s contracts are home owner friendly, especially compared to other standard form contracts. Nonetheless, building disputes are often inevitable. Engaging a specialist construction lawyer for Contract Review and Advice, allows you to manage your risks and administer your contract well. Additionally, a specialist construction lawyer can help you if you are in the middle of a building dispute.

5 Tips for Starting Your Landscaping Business

So you want to begin your landscaping business in NSW. Here are a few essential tips to help you get started.

Homeowner: Questions to Ask When Hiring a Landscape Contractor

Send us a message. We’d love to hear from you.​

You can be confident that you are getting
the right legal advice.